SASCE project presented at Conference of the European Academy of Religion 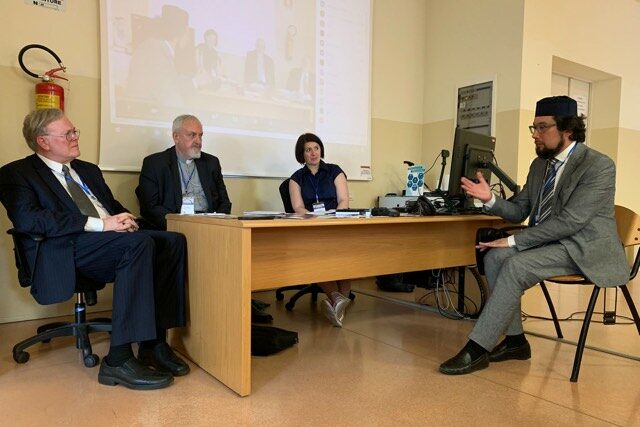 CEC Executive Secretary for Human Rights Dr Elizabeta Kitanovic presented about the Safer and Stronger Communities in Europe (SASCE) project at the Fifth Annual Conference of the European Academy of Religion, held in Bologna, from 20 to 23 June. She shared with the participants results from the SASCE project, stressing the need for protection of the holy sites and worship places in Europe, and beyond.

The session was moderated by Cole Durham and J. Reuben Clark, and among the presenters was His Eminence Elder Metropolitan Emmanuel of Chalcedon. The session was held as part of the policy conversations, a two-day event at the European Academy of Religion in Bologna, that aims to feed into the work of the G20 Interfaith Forum and the UK Ministerial on International Religious Freedom which is planned to be held in London in July 2022.

SASCE_EU is a consortium of interfaith organisations that work together to enhance the security of public spaces and places of worship in Europe.

She described verbal abuse, threats, and harassment about her Muslim identity – including being told to remove her hijab and to wear ‘tighter clothes and makeup’.

Faith communities in Europe need to stand in solidarity together to ensure their safety and security.

This is what the SASCE project works towards.

BREAKING: At least 41 people have reportedly been killed in a fire at a church near Egypt's capital, Cairo.

🎥Ukrainian #churches speak about the role of #religion in the ongoing conflict in Ukraine. Watch video presentations from CEC seminar featuring reflections on how to safeguard justice and truth in #Ukraine.👉https://youtu.be/eD2jGRImYFA

Tell MAMA has won 16 cases over 6 months covering cases like discrimination and bullying in the work place.