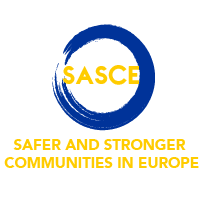 SASCE is a multi-layered project to dramatically increase security in and around places of worship, as well as within and between Christian, Buddhist, Muslim and Jewish communities. Building and expanding on the good practices recommended by the Commission for the protection of public spaces, but also relying on the knowledge and expertise of well-organized communities and security groups, the consortium will: (i) develop concrete tools, which, associated with (ii) training, wider communications and the use of (iii) technology solutions, will be instrumental in achieving a high-level of protection of EU citizens, in full cooperation with authorities throughout the EU.

SASCE is funded by the European Commission under ISFP Fund.

The SACC by EJC highly qualified team of professionals shares its expertise in Crisis Management, Security, Analysis, and Communication.

The SACC Control Room is equipped with all necessary means for supporting a large-scale community crisis event.

During an ongoing crisis, the SACC by EJC team provides assistance and support and performs trainings, seminars and conferences across Europe to improve the level of preparedness of Jewish communities and strengthens ties with the authorities.

Together with CEPOL and other partners, SACC by EJC has developed the security awareness program #TogetherWeareSafer to raise awareness among civilians and improve the general level of security and resilience in Europe.

The Conference of European Churches (CEC) is a fellowship bringing together 114 churches from Orthodox, Protestant, and Anglican traditions from across Europe for dialogue, advocacy, and joint action.

Together we strengthen our common witness, act in service to Europe and the world, promote peace, and work for the unity of the Church. Our vision is “Together in Hope and Witness”.

A network of National Councils of Churches keeps us connected to national and regional concerns and Organisations in Partnership develop our expertise in a number of areas, including diaconia, migration and refugee issues, and women and youth in the churches.

CEC emerged as a peacebuilding effort in 1959, building bridges between the East and the West during the Cold War. This original mission carries us forward today as we continue to work for a humane, social and sustainable Europe at peace with itself and its neighbours.

The European Buddhist Union (EBU) is an international association of Buddhist organizations and national Buddhist unions in Europe, founded in 1975. The presence of Buddhism in all European countries has been growing considerably in the last 50 years so as to represent a number of several million Buddhists, not only through the presence of natives of traditional Buddhist countries, but mainly because an ever-increasing number of Europeans have adopted Buddhism as their philosophy of life, being inspired by the message of wisdom, altruism, open-mindedness, loving kindness and limitless compassion towards all living beings. As the body representing Buddhists in the Member States of the European Union as well as in the Member States of the Council of Europe, the EBU engages internationally, being also a member of several international Buddhist organizations.

Faith Matters aims to advance human rights by promoting and defending pluralism, cohesion and integration and supporting and advocating on behalf of persons whose human rights are violated or threatened by extremism or hate or otherwise.