The SASCE project was highlighted by partner agencies in Brussels Tuesday, October 25th, 2022 as partner organisations described the work being done in this project across 15 European countries. The risk towards faith institutions has markedly increased over the last decade and the SASCE project acknowledges this and was supported by the European Commission Internal Security Fund to meet the advice, capacity and risk assessment needs of faith institutions around risk to them and their congregations.

Over the last decade, churches, mosques and synagogues have been targeted by extremists, thieves and vandals who have sought to harm or damage the property and congregations associated with faith institutions. In France, Christian priests have been murdered by extremists, whilst in Belgium and other countries in Europe, Jewish communities have suffered the deadly brunt of individuals who have been radicalised by Islamist extremist groups like the so-called Islamic State. 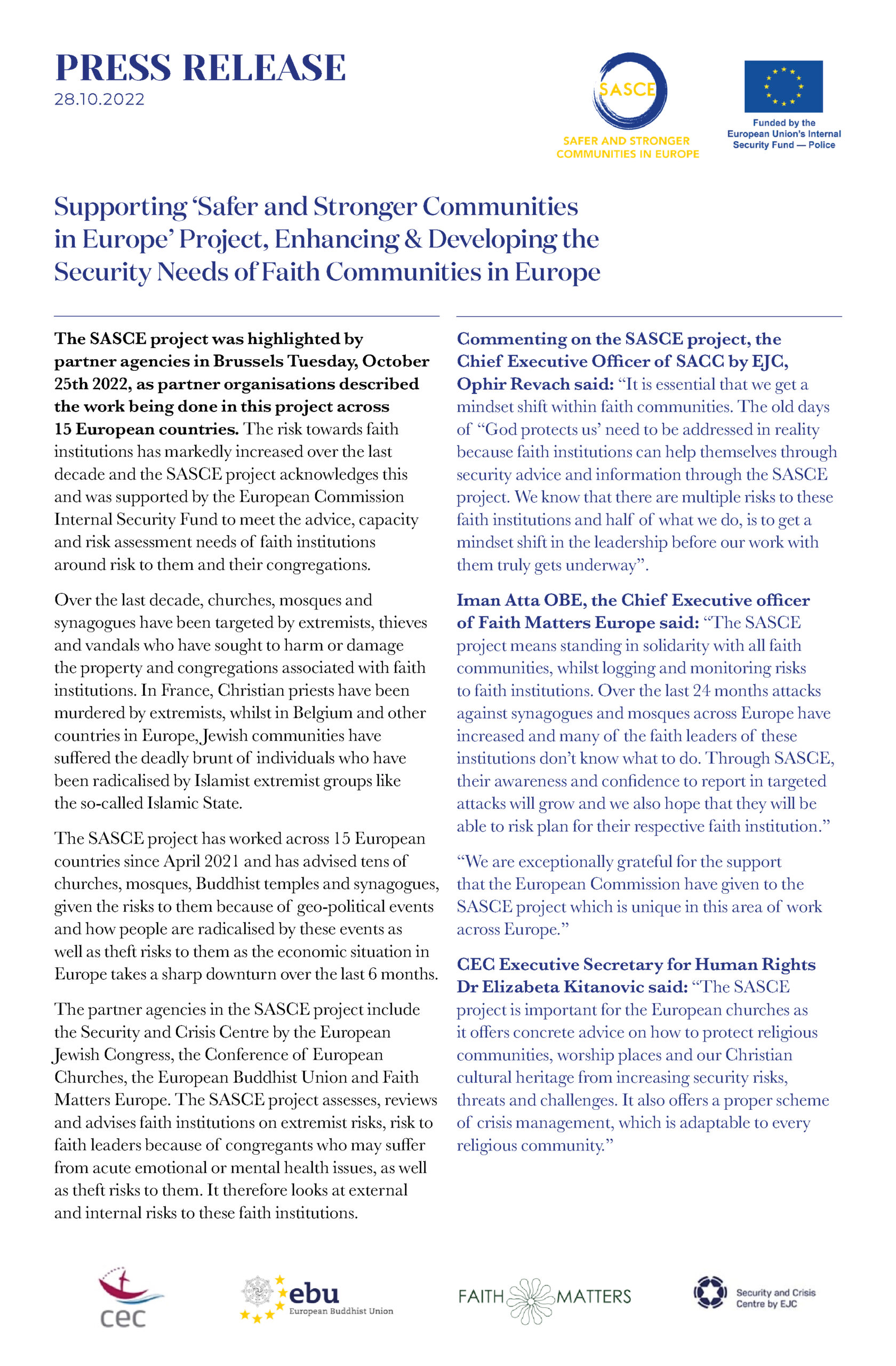 The SASCE project has worked across 15 European countries since April 2021 and has advised tens of churches, mosques, Buddhist temples and synagogues, given the risks to them because of geo-political events and how people are radicalised by these events as well as theft risks to them as the economic situation in Europe takes a sharp downturn over the last 6 months.

The partner agencies in the SASCE project include the Security and Crisis Centre by the European Jewish Congress, the Conference of European Churches, the European Buddhist Union and Faith Matters Europe. The SASCE project assesses, reviews and advises faith institutions on extremist risks, risk to faith leaders because of congregants who may suffer from acute emotional or mental health issues, as well as theft risks to them. It therefore looks at external and internal risks to these faith institutions.

Commenting on the SASCE project, the Chief Executive Officer of SACC by EJC, Ophir Revach said:

‘It is essential that we get a mindset shift within faith communities. The old days of “God protects us’ need to be addressed in reality because faith institutions can help themselves through security advice and information through the SASCE project. We know that there are multiple risks to these faith institutions and half of what we do, is to get a mindset shift in the leadership before our work with them truly gets underway”.

Iman Atta OBE, the Chief Executive officer of Faith Matters Europe said: “The SASCE project means standing in solidarity with all faith communities, whilst logging and monitoring risks to faith institutions. Over the last 24 months attacks against synagogues and mosques across Europe have increased and many of the faith leaders of these institutions don’t know what to do. Through SASCE, their awareness and confidence to report in targeted attacks will grow and we also hope that they will be able to risk plan for their respective faith institution.”

“We are exceptionally grateful for the support that the European Commission have given to the SASCE project which is unique in this area of work across Europe.”

“The SASCE project is important for the European churches as it offers concrete advice on how to protect religious communities, worship places and our Christian cultural heritage from increasing security risks, threats and challenges. It also offers a proper scheme of crisis management, which is adaptable to every religious community.”